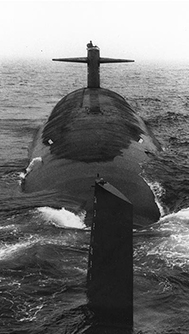 Our purpose is to "Perpetuate the memory of our shipmates who gave their lives in the pursuit of their duties while serving their country. That their dedication, deeds and supreme sacrifice be a constant source of motivation toward greater accomplishments. Pledge loyalty and patriotism to the United States of America and its Constitution.

In addition to perpetuating the memory of departed shipmates, we shall provide a way for all Submariners to gather for mutual benefit and enjoyment. Our common heritage as Submariners shall be strengthened by camaraderie.  We support a strong U.S. Submarine Force.

The organization will engage in various projects and deeds that will bring about the perpetual remembrance of those shipmates who have given the supreme sacrifice. The organization will also endeavor to educate all third parties it comes in contact with about the services our submarine brothers performed and how their sacrifices made possible the freedom and lifestyle we enjoy today."

That's our PURPOSE above, but it's not who we are: We are all United States Submariners!  Whether currently Active, Retired, Reserve or a Honorably discharged veteran, we all were and some still are members of the elite underseas fighting force of the United States Navy.  We are all volunteers who passed stringent testing, challenging training and we proved our mettle when we earned the coveted designation "QUALIFIED IN SUBMARINES".  Whether your dolphins are gold or silver, there is no expiration date on the back of that precious pin.

And, whether you are/were a "E-2", a "4 Star" or anything in between - If you are QUALIFIED IN SUBMARINES and are serving or have honorably served, you belong in United States Submarine Veterans Inc. We have approximately 162 local Bases (chapters) from Pearl Harbor to Portsmouth, NH, including four Internet bases. Our members are from every state in the Union. In addition to local area meetings held throughout the year we also hold a National Convention in a different city every year.

Our members represent the 'tribal' memory of the Submarine Force.  Included are submariners from the very early boats: S, R or earlier: WWII boats; post-war GUPPY boats and FBM and Fast Attack submariners.  Our magazine, AMERICAN SUBMARINER, is widely recognized as a valuable historical resource for submarine history.

So if you are not yet a member, proceed down ladder through the hatch, grab a black and bitter and join with your new crew in USSVI!  You'll be glad you did.

The above was copied from the USSVI home page.